Extracurricular activities, such as clubs and sports, have long been considered a staple of high school life.

When the editors and I began discussing how to approach our enterprise series this year, one thing was made painstakingly obvious: the community and world which we inhabit made it impossible to limit ourselves to just one topic as we had in previous years.

That is why this year, in a departure from tradition, we have decided to give the dedicated reporters on our staff the opportunity to go and seek out the topics that they are passionate about, and give our readers detailed, in-depth coverage.

Each of the stories you see is the fruit of an effort by a dedicated duo of reporters who saw a topic they wanted to pursue, and went out to explore its intricacies. We hope each individual series can give you a more detailed look at a topic that affects people not only at Cambridge, but throughout the globe.

Editor-in-Chief of The Bear Witness

What Role Do Activities Play in College Admissions?

When you look at success stories of students who made it to the college of their dreams, they all seem to share several standout qualities: 4.0 GPAs and near-perfect standardized test scores, to name a few.

But academics alone is not all that distinguishes these students, who appear to have clawed their way to the top of the pack. Their resumes, which are often long and storied, are typically packed with activities.

“Your transcript tells colleges whether you’re a good student or not,” said counselor Olivia Beck. “Getting involved [in extracurricular activities] shows colleges who you are as a person.”

Every year, top-ranked universities with notoriously narrow acceptance rates are faced with thousands of applicants and must make decisions on the basis of the many applications that come across their desks.

Therefore, many students go to the effort of making their application as distinguishable as possible. Extracurricular activities, such as clubs and sports, are one way to accomplish that.

“I feel that the attention is shifting away from standardized testing and colleges began to look more at a person holistically,” said junior Noor El-Gazairly, who participates in several extracurriculars such as the school’s dive team, Model United Nations and Young Democrats, as well as volunteer activities and an internship at the High Museum of Art.

While a student’s academic record is undeniably imperative in the college admissions process, their interests outside of the classroom can inform colleges about their interests, work ethic, and leadership skills.

“Their behavior and conduct outside of a school setting, especially shown through their clubs, plays a huge role,” said Beck.

A question that often gets raised when discussing extracurriculars’ roles in the application process is breadth vs. depth or quality vs. quantity: do colleges want someone who is well-rounded and does activities in many different areas or someone who has devoted much of their time to one subject area?

According to the U.S. News and World Report, a media outlet best known for publishing its highly influential annual “Best Colleges” list of the nation’s top-ranked postsecondary schools, “the quality of a college hopeful’s extracurricular activities matters more than the number of activities he or she participates in.”

Beck believes it ultimately comes down to one’s level of investment in their activities.

“Anyone can go to a couple of meetings and say that they’re in that club, but really digging into it carries a lot of weight,” said Beck.

From a student perspective, being a part of various extracurriculars is a way to show that they are passionate about something outside of school, and differentiates them amongst the applicant pool.

“If you’re lacking extracurriculars, even when you have amazing grades, you need to show that you’re passionate about something,” said sophomore Shir Halfon, who is a part of several clubs at the school including Mock Trial, SkillsUSA and the National English Honors Society in addition to a job outside of school.

Many clubs are also geared towards students’ future career aspirations, which can also certainly help if they are applying to certain collegiate programs.

“When I think about what my clubs are all about, they’re all stuff I’m genuinely interested in. Like Mock trial, I want to be a lawyer,” said Halfon.

And for students who are genuinely passionate about a certain subject area and are sure of what they want to pursue through college and beyond, being in certain extracurriculars is a great way to convey their dedication.

“I have a genuine interest and drive in all branches of my extracurriculars. While I can admit that some clubs look great on applications, I truly enjoy doing them,” said El-Gazairly.

Do students with more extracurricular activities tend to be better at time management, or do their crammed schedules present more challenges than benefits? 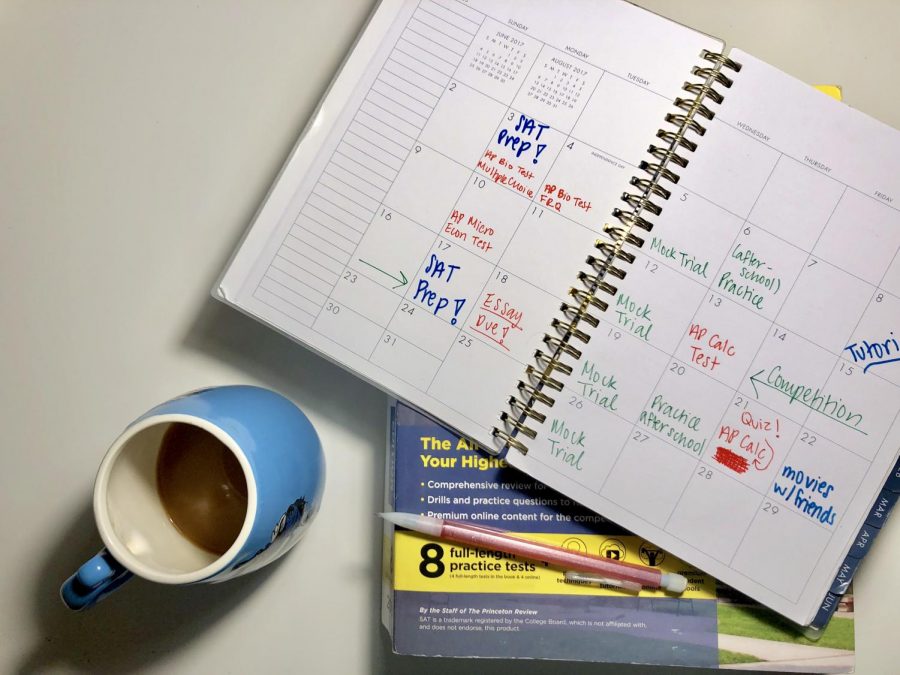 The typical schedule of a busy student is packed with different activities.

For those who participate in extracurriculars, however, that schedule may look very different.

Depending on what season it is, you may see athletes pulling into the parking lot as early as 6 AM. By 7:45 AM, many classrooms are wide awake with club meetings in full swing.

After the last bell of the day rings at 3:30, most students go straight to the buses or their cars. Others, however, may be heading to the practice field or to prepare for their next academic competition.

When you ask them to make plans before or after school, their responses may often be, “I can’t, I have practice.”

These students, many of whom take part in various different extracurriculars, appear to have schedules that are constantly packed.

So how do they manage all of their activities in addition to their schoolwork?

“I feel like you just have to learn how to balance your time,” said junior Ashley Spina, who is a member of the girl’s soccer team as well as DECA.

Spina, who goes to soccer practice every day during the season, considers herself to be adept at managing her time.

“I think I’m good at time management, but I still procrastinate sometimes,” she said.

For many of these students, they often struggle to find the time to maintain their grades on top of time-consuming extracurricular activities.

“I like to deny that it would negatively affect my grades, but it honestly does a little bit,” said sophomore Shir Halfon, who takes part in multiple academic clubs and works a job as a tutor.

Halfon claims that later on in the school year when most clubs have concluded regular meetings and competition seasons are largely over, her grades improve.

“At this point in the year, when most of my clubs are done, my grades go up,” she said.

“My grades don’t really change during the season,” said junior Liz Seymour, who is a member of the softball team in addition to a job that she works four times a week.

However, she says “the quality of [her] work isn’t as good” due to there being less time in her schedule for homework and studying throughout the duration of the season.

This struggle can be real for many students, especially when considering that many of these activities require them to miss class for competitions and games.

“When it comes to doing my work, I can manage myself properly,” said Halfon. “It’s just with the tournaments and club meetings that it gets hard.”

Students like Halfon who take part in multiple competitive events, she said, must often “choose between [competitions].”

It seems as though almost every teen movie, from the iconic “Breakfast Club” to “Grease”, seems to portray two key characters: the jock and the nerd.

The jock — though not the sharpest tool in the shed — is popular, attractive and loved by their peers. The nerd, while not as popular and oftentimes bullied, is typically portrayed with near-superhuman intelligence and a promising future ahead of them.

And although these stereotypes may seems to be outdated tropes to those of us in the 21st century, stereotyping has always been a mainstay of the high school experience.

Depending on what extracurricular activities a student participates in, it can have a huge impact on how their peers perceive them.

Most of our assumptions about people come from the media. TV shows and movies have a huge influence on our perception of others.

Movies like, “The Breakfast Club” have not only been extremely popular among viewers but can also be extremely influential in the audience’s opinion of others.

The film features five students in detention, each from a different group in their high school. Each one of them perfectly embodies a high school stereotype.

There is a basic popular girl, a nerd, a rebel, an outcast and a typical jock.

When people watch movies like this, specifically younger people whose opinions are still impressionable, they may subconsciously learn to make assumptions about different types of people.

Athletes are often considered to be at the top of the high school food chain. In movies, they’re shown as the popular ones who go to parties and have a lot of friends.

At Cambridge, a similar stereotype exists.

Junior Tess Abraham said, “The basic athlete is usually very fit, attractive, and has a lot of friends, but are not very smart.”

On the other hand, there are students who like to focus on more academically associated activities like academically-oriented clubs. These students are usually thought to be weird or nerdy, and not have many friends.

Students who participate in both academic clubs and sports appear to be more well rounded as individuals and don’t receive such harsh judgments.

Junior Ariel Birnbaum said, “They are either hard workers who care about college, or their parents force them to do both.”

They are also perceived as being more adept at managing their time.

“To be able to do both a club and a sport you have to be good at time management to stay focused and get everything done,” said Abraham.

Lastly, there are teenagers who neither sports nor clubs.

These students are pigeonholed to be slackers, many of whom don’t care about their future.

“If you don’t do any school activities, you are probably bad at everything or you don’t try enough to be good,” said Basharu.

“They might actually do something outside of school — like a job — that keeps them busy, but they are seen as the stereotypical slacker.”

These students are not necessarily saying they believe these stereotypes but they are saying that they exist and are noticeable at the school.

In reality, people might be the exact opposite of the assumptions based on their choice of extracurriculars.

Another thing to consider is the variation of sports and clubs.

Birnbaum said, “When I think of clubs I think of things like chess club but, there are also clubs that are sports so even tho they participate in a club that doesn’t mean they are unathletic.”

She is correct; not all clubs at Cambridge are academically focused, with clubs like dance team, equestrian club and fencing club that are all athletically associated.

When asked why we as a society believe stereotypes and rumors, Abraham said, “People don’t care enough to actually get to know someone and see what they are actually like so they just believe what people say about them.”

Being stereotyped by a peer can be hurtful and sometimes offensive, especially when there is often much more to a person than what meets the eye.