What Role Does Caffeine Play in Students’ Sleep? 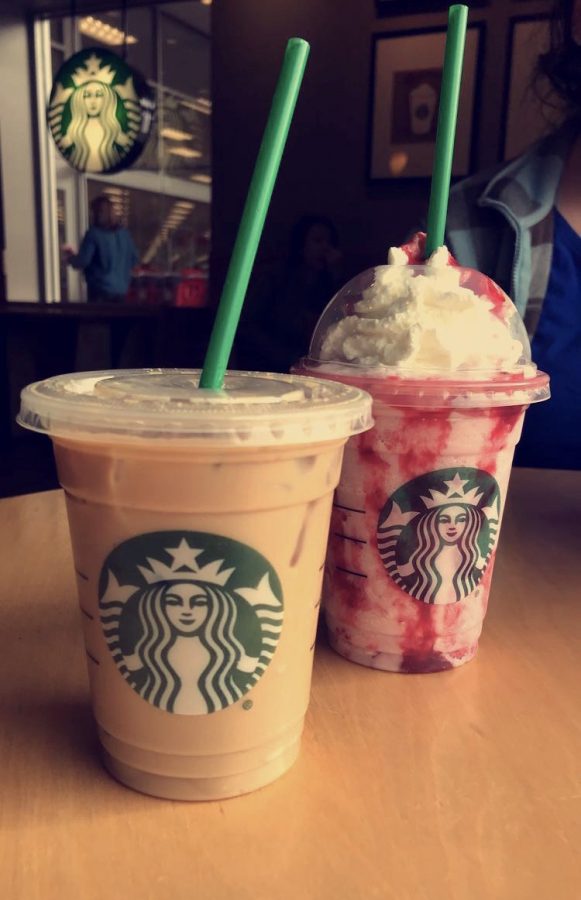 The types of caffeinated beverages commonly seen in the hands of Cambridge students: Starbucks iced drinks.

Whether they arrive early for clubs and study sessions or don’t come to school until several periods into the day, mornings look different for many students.

But for some students, regardless of what their morning schedules look like, the day doesn’t start without coffee.

“It helps with a lack of focus and concentration,” said senior Mackenzie Hale, a Starbucks barista. “When you’re feeling drowsy, caffeine kind of gives you that energy boost. It helps speed up your thinking process.”

Hale was not initially a fan of coffee but grew to love it in eighth grade.

“Well, I got the peppermint mocha frappuccino. I was like, ‘wow, this is a lot of coffee’, but I kept drinking it and became more and more tolerant,” she said.

Hale does not only drink coffee for the taste, however. As a student and employee who gets about five hours of sleep a night, she also uses the drink to battle sleep deprivation.

“I mean, sleep would be a great solution. Coffee is more like a treatment that gets rid of some of the symptoms,” said Hale. “It’s not really a cure, but it helps.”

“I usually drink around a cup in the morning and then after school I go to Starbucks where I get more coffee,” said Becerra.

Becerra is one of many students who frequent the nearby Starbucks, with school rushes occuring after school and on GROWL mornings.

Even so, coffee has not always been as popular among high schoolers as it is today.

“The ubiquitous coffee cup was not around when I was in high school,” said social studies teacher James Campbell.

Campbell had not started drinking coffee until he was 30 and now drinks eight cups a day on a weekday.

Like Hale, Campbell drinks coffee to fight his sleep deprivation.

“At a certain point, it becomes a vicious cycle,” said Campbell. “You don’t think of it this way, but teaching is a really intensive cycle. You’re not getting enough sleep, so you’re drinking too much coffee, so then you don’t sleep.”

But for Campbell, this was not an issue until well into adulthood.

So, why is coffee so prevalent among students now?

Campbell attributes this to technology, the increasingly busy schedules of students and the culture of coffee.

Coffee is all around students, from those like Hale who work at coffee shops to those who simply arrive at school early. Cups of Cambridge, the school’s Community Based Instruction (CBI)-run coffee shop, is open in the mornings for students.

Carrie Bone, co-founder and manager of Cups of Cambridge, said she thinks the increasing availability of coffee helps make it more appealing to students.

Bone said when she was in high school, she didn’t have an on-campus coffee shop, but now it’s common for a school to have one through its CBI program.

Cups of Cambridge is only open for 20 minutes each morning, but in that time, Bone said, they can see between 20 and 50 customers.

“Our most popular stuff is definitely the iced coffee,” said Bone, estimating that 90 percent of the students who get coffee from Cups of Cambridge order iced coffee.

Bone said while the iced coffee isn’t particularly strong, many students like that it is available in multiple flavors.

When she was in high school, Bone said, she liked sweet, flavored coffee drinks. The popularity of Cups of Cambridge’s own flavored drinks makes her think many students today feel the same way.

“I think more so it is kind of the idea of getting coffee,” said Bone.

And indeed, coffee has become cool, with a large presence on social media through latte art and the coffee shop vibe, said Hale.

This trend is carried on through students.

“Often times, from a young age, kids look at older kids to behave,” said Campbell. “When everyone’s holding a cup of coffee like an accessory, kids think ‘that’s the thing that adults do.’ That seems like a rite of passage.”

But a cause of coffee popularity in students that generates more concern is the overcommitment of students to their technology and to work that causes them to lack energy without caffeine.

“I think when you talk to a human being, that’s a refreshing and energizing experience,” said Campbell. “When you’re on a device, it’s draining, even if you’re not oversubscribed.”

Campbell said too much time on devices combined with an immense workload causes students of today to not get enough rest and turn to that cup of fuel to keep them going.

And because students’ bodies are still developing, the health effect of the amount of caffeine some students are consuming raises worries.

“You can still have coffee. It’s not a bad thing, but don’t be reliant,” said Hale. “Part of coffee addiction is if you don’t have coffee, you’re extremely tired. You have headaches and a lack of concentration. You become reliant on the adrenaline of coffee even if you got enough sleep.”