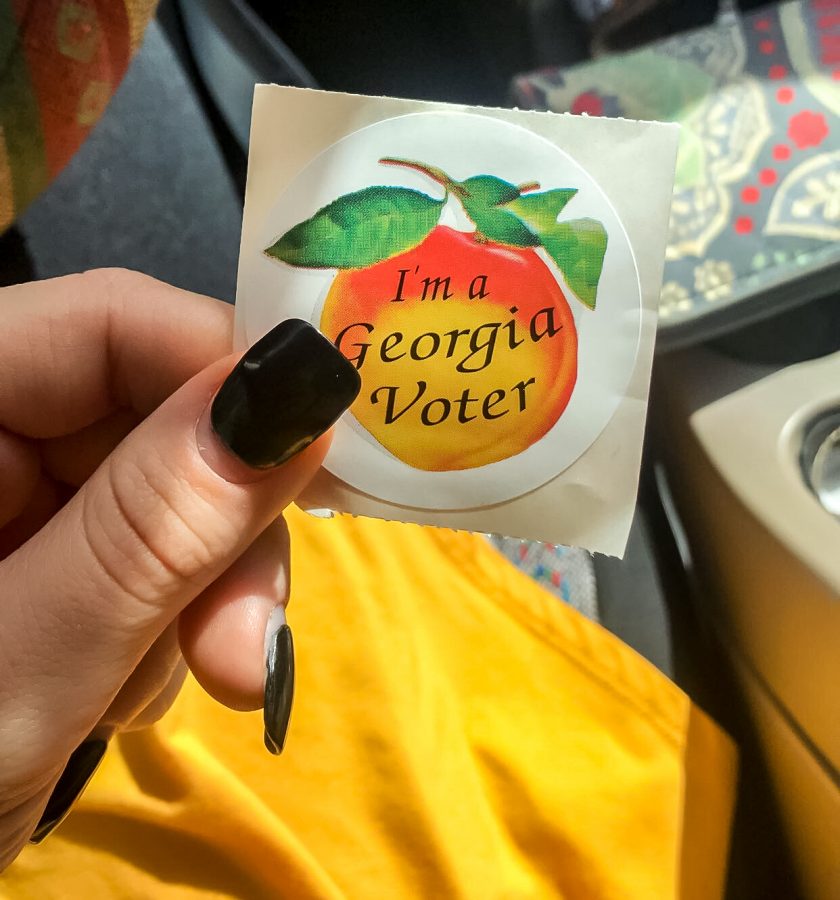 Senior Maggie Martin proudly shows off the “I’m a Georgia Voter” sticker she got after early voting.

“Teachers vs. Students”: What Does Voting in Today’s America Look Like?

From 1776 to 2018, elections in America have certainly undergone immense changes. However, a few key elements have remained unchanged since the Founding Fathers first donned their powdered wigs.

Mudslinging, extreme appeals to emotion and divisive rhetoric have always been as much a staple of American life as apple pie, baseball and fireworks.

The 2016 presidential election brought all these tactics together and toxic political divisions have appeared to come to a peak in modern America.

Now, in 2018, tens of thousands of young Americans are reaching the voting age, including many of the school’s seniors. These seniors will, in today’s political environment, cast their very first ballot.

Compare this to many of the school’s teachers, most of whom have been voting for many years.

AP US and Comparative Government teacher James Campbell voted for the first time in the 1994 midterm election, in the state of Delaware.

Because his family was heavily involved in politics, he had been politically active since childhood, said Campbell. He even began working campaigns at 11 years old.

“It was just something my family always did,” said Campbell. “We always voted.”

Because he was a poll worker for the 1994 election and did not live in his home district, he was not able to go into the polling booth to cast his ballot. Instead of being able to “go in the booth and hit the buttons,” he had to fill out a ballot in a cubicle at City Hall.

“It was really anticlimactic,” said Campbell of having to cast an absentee ballot.

Although he describes the political atmosphere of the time as “less angry than it is today,” tensions between parties were still palpable.

There was more animosity at the time than we were used to seeing.”

— AP US and Comparative Government Teacher

“There was more animosity at the time than we were used to seeing,” said Campbell.

He describes this time as the beginning of the heavily polarized political landscape we are seeing today, with a “beginning of this animosity and hostility between the two parties.”

Now, in the time when this animosity and hostility has accumulated, senior Tyler Wolf will be heading to the polls to participate in the democratic process for the first time.

Wolf said he feels that voting is an obligation and that those who are old enough should head out to the polls.

“I feel like I’m old enough to where I need to be voting,” he said.

Wolf stated that he would be voting for gubernatorial candidate Brian Kemp, and looks forward to doing so.

“I’m excited to vote for him,” he said. “I like what he stands for as a candidate.”

Senior Maggie Martin has already cast her vote, having gone to early voting.

“I am voting because I don’t like the current representatives’ lack of action or regard for their constituents calls to action,” Martin said of her reason for going to the polls.

She describes her very first ballot as an odd experience.

“My first time voting felt weird,” she said. “Overall, they [the poll workers] were very kind, but from the surprised reaction at my age, first time voting was kind of sad to realize how few young voters come out.”

It is because of this that Martin emphasizes the importance of youth political participation.

Even if the candidate you voted for doesn’t win, it feels better to know that your voice was accounted for.”

“Even if the candidate you voted for doesn’t win, it feels better to know that your voice was accounted for,” she said.

While Wolf may be casting his first ballot, AP World History and Sociology teacher April Pezzolla is a seasoned voter.

She recalls the first time she voted as being “extremely meaningful.”

“I was really involved politically, in anti-war movements, in women’s movements, all of that,” said Pezzolla.

“There was no way I was not going to vote.”

A New York native, Pezzolla drove back to her hometown to vote in the 1972 Presidential election. This election pitted incumbent Republican Richard Nixon against the Democratic candidate George McGovern.

“I was one of the first 18-year-olds to be able to vote when the 26th amendment was passed,” she said. “It was extremely meaningful to me to be able to do that.”

This time period was a tumultuous one in American history, with international tensions coming to a peak in the form of the Vietnam War. Young people at the time, like Pezzolla, were especially involved in the political movements of the time.

“[The election] was during the anti-war movement. There was a lot of tension, there were a lot of riots going on,” she said.

Although this feels similar to today’s tense, divisive atmosphere, Pezzolla notes one stark difference between then and now.

“We didn’t have all of the social media,” she said. “You really had to pay attention to what people were saying and doing.”

In today’s America, the political landscape more resembles trench warfare, with either side either unwilling or unable to back down.

Vote and be an informed citizen.”

“Vote and be an informed citizen,” said Campbell.

America’s youth in particular need to understand the value of their vote claims Pezzolla.

“Young people need to understand that, around the world, there are people that will be in very dangerous situations to vote, take their lives into their own hands to be able to vote,” she said.

Being able to vote and elect leaders in a democratic society is not only a privilege but a responsibility.