The Force is Strong with This One: Meet “Lightsaber Kid” 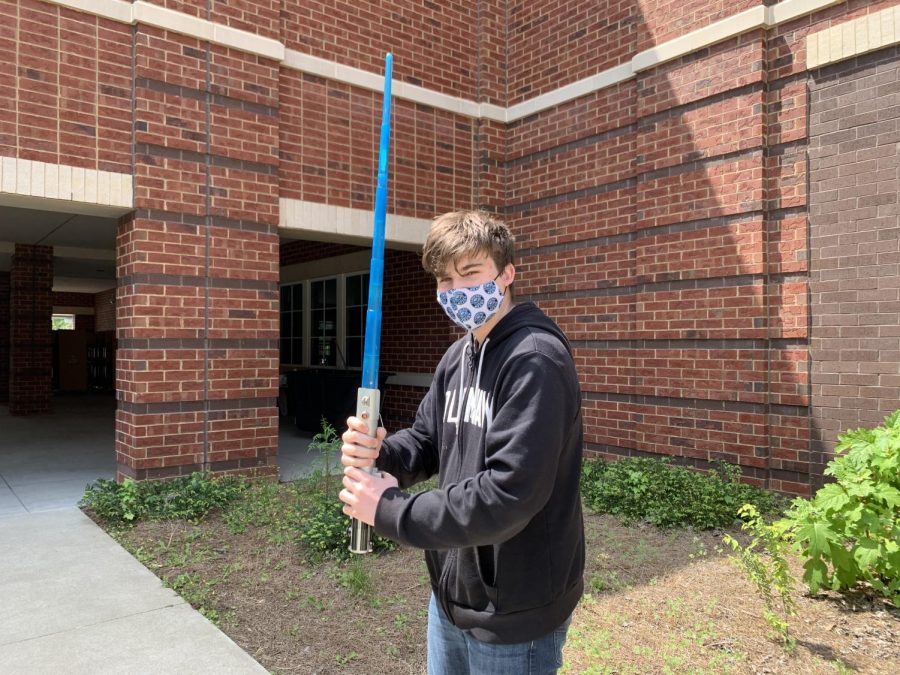 Pippins poses with one of his lightsabers in Luke Skywalker's iconic lightsaber stance.

For the past few weeks, students attending school in-person may have been intrigued by a freshman wielding colorful, plastic swords from a fictional universe.

He stands out, mysterious to passersby. One thing everyone is sure of, though, is that his iconic blades are a clear indication of an interest in Star Wars. If the name “Luke Pippins” doesn’t sound familiar, maybe his nickname will.

He is known simply as “Lightsaber Kid.”

Say his nickname and almost everyone will know who you’re talking about.

“I want to meet him,” said sophomore Nadia Vollrath.

Pippins’ love for Star Wars and lightsabers goes way back.

When asked when his fascination with the franchise began, he said with a laugh, “Is there an age before zero?”

Since his birth, Pippins’ dad has been one of the biggest reasons he developed such deep enthusiasm for Star Wars.

“I’m pretty sure we got home from the hospital and then he put [Star Wars] on and sat me in front of it,” he said.

Pippins added that his dad even does Star Wars-related charity work. He is a part of an organization where he dresses up as a Stormtrooper – a full suit of armor, a blaster, handcuffs and all – and goes to hospitals to cheer up little kids.

Pippins said he enjoys Star Wars because “it’s just the idea that something other than what is currently on this world could exist.” Plus, he said, who doesn’t love daring adventures and awesome spaceships?

He said he has watched the films about 50 times each, has more than 100 Star Wars novels and has a collection of around 10 lightsabers, one of which he’s had since he was born.

And yes, he was named after Luke Skywalker.

Perhaps, if you have spotted Pippins with his lightsabers throughout the building, you might wonder why he brought them in the first place.

In late February, when his English class began their reenactment of William Shakespeare’s “Romeo and Juliet,” his teacher, Megon Garcia, had a box of props for students to utilize in their performances. Inside the container were toy swords, but Pippins thought a lightsaber would be a more exciting alternative, so he asked Garcia if he could bring it.

Garcia said Pippins was involved in all three of the prominent fight scenes of the play. He primarily took on the role of feisty Tybalt, but he also “would volunteer for a role where he knew that character would normally carry a sword with them, even if he didn’t fight,” she said.

Garcia said the lightsabers have certainly added a liveliness to the classroom and increased engagement in the performances, especially among the boys.

“Teenage boys are not interested in a love story. Plain and simple. They don’t care about star-crossed lovers,” she said. “Most of my volunteers for reading aloud the lines of the play were boys because they all wanted to hold swords or lightsabers.”

Pippins’ lightsaber combat skills came in handy outside Garcia’s room. When he sometimes brings two lightsabers to school, students may notice he has an extra and challenge him to a duel, he said.

These battles are either scheduled or spontaneous, and they can take place anywhere. One even occurred in the middle of the lunch line.

“This random kid just walked up to me and was like, ‘Hey, you want to fight?’ And I was like, ‘yeah,’ so I detached one of the lightsabers, handed it to him, pulled out mine and then fought,” said Pippins.

“He was actually pretty good. He probably had some practice.”

The winner of a lightsaber duel is the person who taps all four of his or her opponent’s limbs with the saber first, said Pippins.

In March, Pippins added a special item to his saber collection: a lightsaber hilt (handle) that he sketched and 3D-printed in the engineering room at school.

He said his teacher, Wayne Thompson, has been teaching his class the basics of OnShape, a computer program used to create 3D models. When he was bored one day, he fashioned the structure of the hilt on OnShape, and Thompson gave him permission to print it, Pippins said.

“The printer takes a spool of plastic wire, it runs it through a superheater, it heats it up to a liquid, almost, and then it takes your 3D object that you designed, and it goes layer-by-layer, building on that layer until you have your shape,” said Pippins.

After 14 hours in the machine, his handiwork was complete. Now, he is in the process of painting it.

When the paint job is done, “We’re going to try to put an LED on there to make it look like a laser light is coming out of it,” said Thompson, adding that they will attach a switch and small battery pack to the back of the saber.

“He’s going to blow this thing away,” he said.

But Pippins isn’t keeping his knack for 3D-printed lightsaber hilts to himself. His reputation as “Lightsaber Kid” has led to him crafting custom hilts.

“I got him to print one for me,” said freshman Jack Dinnsen, a classmate of Pippins’. “He’s awesome.”

Dinnsen said Pippins has many commissions from students. None of the designs have been sent through the 3D printer yet, as Pippins is still in the process of structuring them on OnShape, but these students will have their lightsaber hilts soon and at no charge.

“He’s just doing it out of the kindness of his heart,” said Dinnsen.

For a freshman, Pippins’ skills on OnShape are remarkable, Thompson said, and he cannot wait to see where Pippins takes his talents beyond his impressive lightsaber hilt through his years in the engineering pathway.

“This is a kid who will build the next Iron Man,” said Thompson.