Here to Home: How and Why Face-to-Face Attendance is Gradually Declining 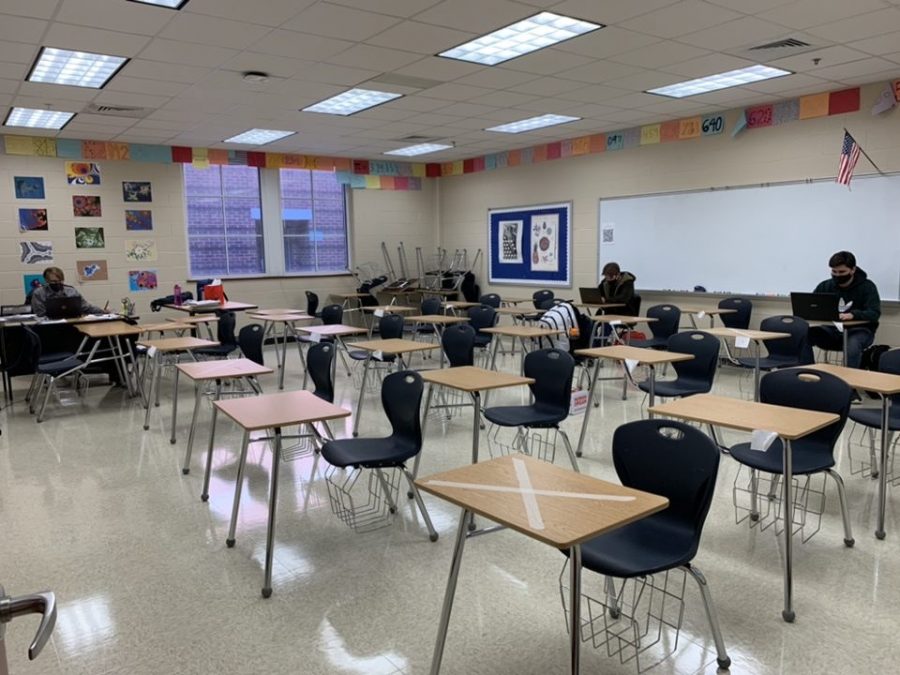 Pomerance teaches to an almost-empty classroom.

School has long felt like the eternal shuffle: in and out, to school and to home, without an end in sight. From kindergarten to college, it’s a way of life that almost every weekday would equally be a school day, meaning it’s time to board the bus or drive the car or make the walk or ride the bike.

Each Monday now, many people continue to trek. Not from their home to the bus stop, but from their bed to their desk, and increasingly, the number of people making that trek expands.

Many of those making the latter trip were once doing the former. The number of students attending school physically has significantly decreased, as they make the decision to move back online.

When face-to-face instruction began full-time this year on Oct. 14, 71% of students made the decision to attend physically. By Nov. 1, this figure dropped to 56%.

Senior Ben Werth is one of the students who made the switch from in-person to online. Initially, Werth was indifferent on the question of whether to return, but chose in-person school under pressure from his parents. However, at the beginning of November, he switched back to virtual.

Among his motivations, he said, was the realization that nothing truly changed between virtual and in-person school. While it was nice to see everyone and everything, he said, the education was essentially the same either way, the only difference being whether it went through a computer screen.

Another reason was the beginning of the wrestling season. Students may have to quarantine if they are near someone in school who becomes sick with COVID-19, and this means they are unable to participate in sports during that time. Werth, a member of the wrestling team, didn’t want to take the risk inherent in returning to school.

The final motivation was the desire to save time. Going to school, from school and between classes all adds up to a significant amount of time, which Werth said he would be able to put towards better things at home.

Between all these factors, Werth made the choice to shift over. While he said others may learn better in-person, and he does miss the social aspect, it wasn’t enough to prevent him from making the choice.

Principal Ashley Agans said in mid–November that another potential motivation for students was the upcoming Thanksgiving break. As the holiday neared, many families planned to visit relatives, often older ones, and did not want to risk transmitting COVID-19 obtained from school.

While some of these students may have returned since Thanksgiving, Agans said many might choose to remain virtual after break.

While many students are leaving in-person school, teachers cannot. They have been in the building since the beginning of the school year, even before students were allowed to return, and they remain there regardless of how many students show up.

Math teacher David Pomerance said he has witnessed the phenomenon of decreasing numbers. While he can’t attest to specific numbers, he said he is sure that, as time has passed, the number of students attending physically has gone markedly down, reappearing online.

Despite this, Pomerance said the educational effect is minor at worst.

In essence, he said, it’s as it was before in-person school began, only with a small number of people in the building. With the teachers having spent the past few months teaching online, it has become more normal and somewhat easier, with that experience minimizing disruptions from so many students making the shift.

Pomerance noted that the profile of who decides to return to school versus who remains online can vary significantly. He believes various factors comes into play, including age, home life and academic priorities. He said another teacher, April Hughes, noticed in her classes that seniors were more likely to be virtual while freshman were more likely to be in-person.

Alongside the effect on education being minor, so too is the administration’s concern over the phenomenon. It’s not necessarily seen as an issue, so much as it is students exercising their ability to choose, according to Agans.

“It doesn’t matter to us whether you’re here or there so long as you’re getting your education,” she said.

The ability to shift between virtual and in-person school was introduced after the return to school, and the decision students made then was intended to be permanent and unchangeable. When cases of COVID-19 began to increase after the reopening, the decision was reversed.

While the majority of changes have been students going from face-to-face to virtual, Agans said there were a number of people going the other way and switching from virtual to in-person, particularly athletes whose respective sports seasons have ended.

Students who wish to change must email faculty and make a request, and whether the requests are approved are determined on a case-by-case basis depending on the reasoning for each one. Those who make these changes must expect them to be at least semi-permanent. Agans said, for example, requests asking to change a couple of days would not be honored.

Agans said schools will remain open for anyone who wishes to return, even if it’s a small number. She said even if face-to-face numbers continue to fall, there would be no reason to shut down the school because teachers will continue working from the building.

Although class sizes are dwindling, the students remain, albeit behind a computer screen. In this new world of technology, one cannot escape education. The only decision is how far away to have it.