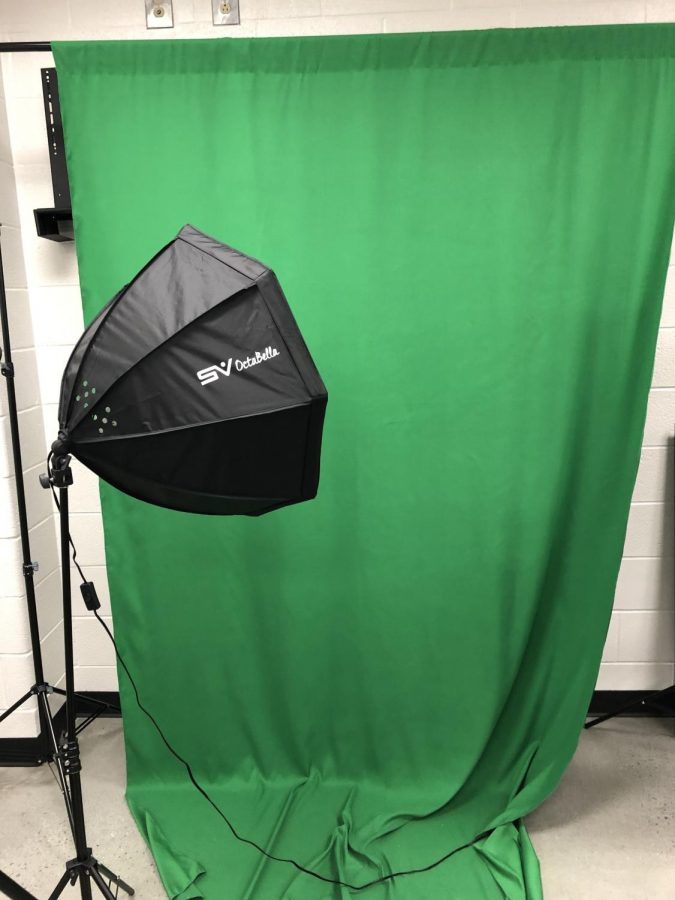 The student center green screen, which is now open for student use.

When extreme storms and cold fronts move across the country, meteorologists run to their sets to show a visual of the country’s forecast.

Their advanced technology, giving viewers a picture of the entire country at once, is now available in the student center.

It’s called a green screen – a piece of technology used to change the background of a video.

With a green screen and audio mixer now open to all students and faculty, anyone at the school can enhance their videos with this technology.

Laura Morgan, the school’s media specialist, has set up the green screen in the room behind the bear statue in the Student Center.

Green screens are often used for movie sets and video production to change the background for the video. Whether that background is a jungle, an office, or even just a solid color, it always adds an exciting detail to a video.

Morgan said, “Students can use it for video projects and stuff like that.”

This video production technology can be helpful to many students who do not have access to enhanced editing capabilities.

Besides the green screen, she included a mixer used for audio and video clips that are displayed on the screen.

The green screen will be open to all students, with permission from Morgan or other Student Center staff.

Some students are excited to get their hands on the equipment, and can’t wait to take their video projects up a notch.

“It’s going to be helpful to make your projects versus finding something outside of the school,” said sophomore Isabel Conrath.

However, member of the school’s broadcasting network Reed Smith, a junior and member of The Bridge, has mixed emotions on the new library accessory.

Smith said, “It’s good for the kids who aren’t on The Bridge because they don’t have those resources. But it puts the film kids at a disadvantage because now everyone wants to know how to operate it, and now there’s more on our plate.”

His concern was based on the lack of experience most students have with video technology. Once the other students get their hands on the green screen, students will flood the film room with questions and problems.

Smith later said, “Maybe if they learn how to do it, it will be a bit better,” insinuating that there may be hope for the amateur video students.

Despite the mixed reviews, the new technology will have a large impact on the student and faculty here at Cambridge who are interested in making a video program or project.