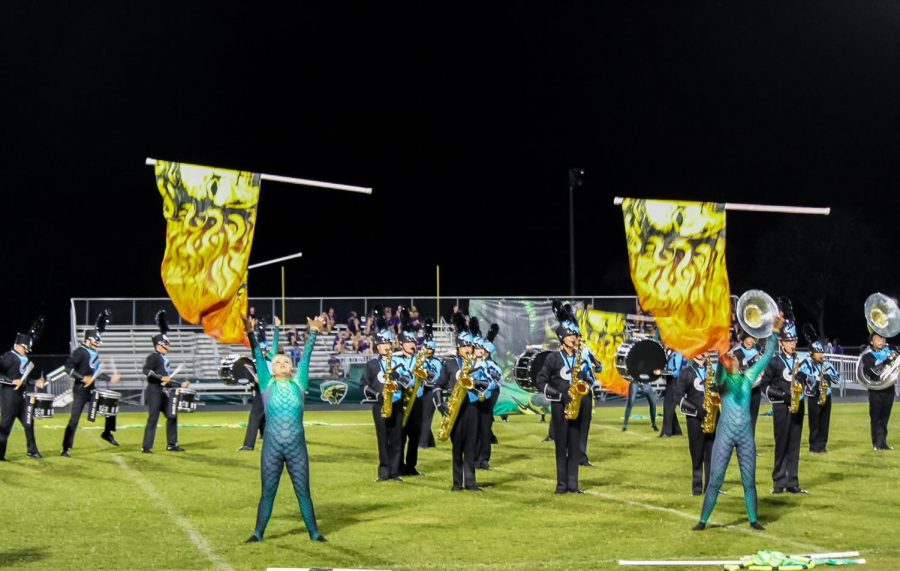 The marching band and color guard competing at their competition in Ponte Vedra, Fla.

Imagine performing in front of a large audience striving to give your best performance. All the while a judge is looking over your shoulder, critiquing every action slightly out of place.

This is what the marching band encountered while they performed in Florida.

On Oct. 6, the school marching band placed fourth in its competition in Ponte Vedra, Fla and won two major awards: Best in Class Percussion and Best in Class Color Guard.

The band and color guard competed against 13 other schools. The preliminary round consisted of all 14 schools and this was the round in which they won the awards.

After the first round, the judges scored the performances. The top 10 bands got to move on to the final round.

While at the competition, the band encountered many situations they were not accustomed to.

One situation the marching band encountered during the competition was the style of judging.

This event had a different judging style in that it had specific judges gauge certain aspects of the band, and the judges could stand next to the band while it performed.

Junior Tristen Bennie, a member of the percussion group, said the band was used to the Olympic style of judging, which is where there are five judges that judge the entire performance.

Bennie said this made it very uncomfortable to perform.

Another situation the band members encountered was the fact that they had to perform twice. Bennie said the competitions usually have only one round.

Even though these circumstances were unusual for the band, it worked out in the end in their favor.

“We improved by 2.6 points between the preliminary round and the final round,” said Assistant Band Director Katie Groves.

They were also very close to coming in third place. Groves said they only needed 0.2 points to come in third.

Some students shared their excitement for the awards they achieved while in Florida.

“It felt amazing,” said Bennie when talking about winning the award.

These awards showed some of the band members just how their hard work and perseverance can pay off in the end.

“It was exciting,” said freshman color guard member Abbey Killebrew. “The many hours in the sun getting sunburned actually paid off.”

At the moment, the marching band is putting the finishing touches on their performance for their final competition at Sprayberry High School in Marietta.

Color Guard Co-Captain Imogen Guest, senior, said everyone has been preparing extensively for the last competition of the season.

“We hope to win more [awards] at the last competition this Saturday and we’ve been working super hard to get everything perfect,” said Guest.